Serving the industry since 1945!

We have an impeccable track record for completing projects within budget and on schedule without compromising quality workmanship. We tackle each project from the largest to the smallest with the same strategy, focusing on safety and efficiency from the start to completion.

Rountree was founded in December of 1945 by A.F. (Buck) Rountree and his son A. L. (Lavern) Rountree, as Rountree Transfer & Storage. Together they built a sizable customer base and became the first North American agent in South Florida.Over the next few years the demand for special handling of Machinery, commodities for Florida Power & Light and Southern Bell became a large part of the business as well.

During the period of regulation the need for statewide authority was necessary to accommodate customer demands. At this time with Southern Florida growing and the demand for Heavy Haul authority was also obtained. Lavern participated in PSC rate hearings which established the rates promulgated for the industry and Rountree became one of the largest heavy haulers in the state of Florida. They were instrumental in transporting some of the first concrete bridge beams used to rebuild the bridges in the lower Keys using 2 tractors or tractors & steerable dollies, extendable trailers and jeep dollies, large transformers for FP&L, pre-stressed concrete and numerous oversize loads for Walt Disney World & Epcot!

In the seventies Lavern’s sons, daughter and son-in-law joined him in the business. The guys learned the business “from the ground up”! In the eighties the company was so prominent in the transportation & rigging aspect of the industry that they re-organized the company and changed the name to “Rountree Transport & Rigging, Inc.” which better described the full capabilities of the company.

Rountree has expanded its authority and scope of operations to include the southeastern US and performs rigging projects in these areas as well as the Bahamas & the Virgin Islands.

Rountree is still family owned and operated, currently in its fourth generation. Its combination of Owners, managers, supervisors and skilled work force have over 75 years of knowledge in this Industry to adequately serve its clients and customers. 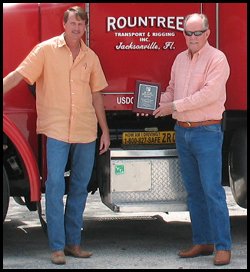 We are proud to announce that Rountree Transport and Rigging Inc. has received the Longevity Award from the Specialized Carriers & Rigging Assoc. (SCRA).

The award is given to companies who been involved with SCRA for over thirty years.

R/T is proud to be involved with the SCRA by serving on the Board, being involved with various committees & the Foundation Board as well.

Rountree is family owned and operated and is currently in it’s fourth generation. It’s combination of Owners, Managers, Supervisors and skilled work force have over 75 years of knowledge in the industry to help serve our customers and clients.

Rountree Transport & Rigging, Inc: Serving the US since 1945!

Fill out this form and let us know who you are, how we can contact you, and what your transport or rigging needs are, and we will get back to you as soon as possible.

Founded in 1945
Rountree Transport has been serving customers for over 75 years!